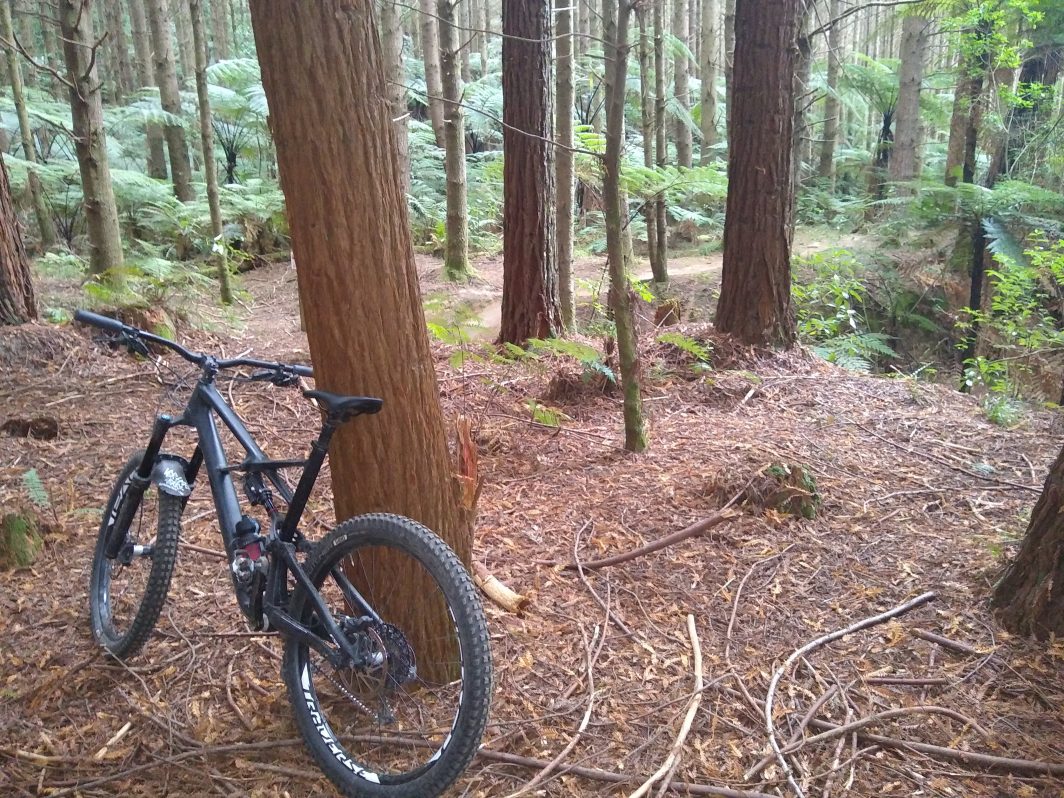 Being a keen (but not very good) mountain biker it was important to me that all our campervans had bike racks.

Fay and Gina had good quality racks when we purchased them but Flo didn’t so we bought and installed a Thule Sport Rack on her rear door. A few weekends ago I was able to try out the set up for myself.

How to use the bike rack

These bike racks are designed for standard bikes which aren’t as fat as a mountain bike so getting 2 mountain bikes on, secure and without rubbing is a bit more involved.

I was heading to Rotorua with my son Gus and the two bikes for this trip were a Trek Remedy and a Specialised Enduro – both with carbon frames and both rather treasured so it was very important they were not going to rub up against each other on the trip and that they would be secure. Both these bikes are XL size so about as big as they come.

The good news is, it can be done. While there’s no ‘bad news’ as such it is important to note that you are going to have to do some fiddling around to get them on. Once we’d worked out the optimal arrangement for these two bikes it was only a matter of a minute or two to get them on and off next time.

The first bike on was the Trek and with the 800mm handlebars you have to twist them otherwise you’re going to end up with a handlebar through your back window. With an allen key handy this just involves loosening the two bolts on the side of the stem.

The second bike (the Enduro) was then added but in a top and tail fashion and being on the outer tray there’s no need to adjust the handlebars on this bike (also 800mm wide).

The two bikes mounted are actually not touching each other at any point but being a little precious (ok, a LOT precious) we used a good old pool noodle to add a little padding on the front suspension as you can see in the images.

With bikes onboard, it remained only to pack a few clothes and victuals into the campervan and we were off. No matter how often I head away the ease of packing a campervan always makes me smile. Tons of storage and a fridge – so easy. We stow helmets, pads and shoes, a few bike tools and pump in the rear storage area.

The Waipa carpark in Rotorua was our base – no need for changing rooms or even bathrooms as it’s all on board. We returned to the campervan to whip up some carb-loaded lunch on the outdoor BBQ (much to the envy of our neighbouring riders) enjoyed a coffee and then returned to the trails.

Rotorua is a 3-hour drive from Auckland and having done that drive many times over the years I feel very qualified to say that the Mercedes Sprinter campervan is easily the most comfortable ride. You’re elevated so visibility is great and I just don’t seem to experience the same fatigue as when driving a car. The benefits of having your own bed, kitchen and bathroom along for the ride don’t need to be explained.

We stayed this time at Rotorua Thermal Holiday Park. We’re equipped for freedom camping and Rotorua does offer a few good spots for this but the Holiday Park is very close to the trails and they have their own thermal pools ideal for the post-ride soak. With the NZMCA 10% discount two nights for two adults in a powered site was a very reasonable $81.

Being just after COVID-19 lockdown we felt it only proper to spend some money in town and rounded off a full day on the trails with dinner and the excellent local Crouchers beer at Brew on Tutanekai Street. That’s a consistent 5-star experience in my book.

There’s so much to Rotorua but for me, it’s all about mountain biking and I reckon the home of the best trails in New Zealand. I’ve been visiting the trails and staying in Rotorua since the early 2000’s and it just gets better and better. One significant recent development is that Tak and Tu Mutu and their MTB Rotorua operation have taken over the trail shuttles and while the previous operator did a fine job for many years these guys have taken things to a new level. The shuttle buses are comfortable and surprisingly clean, the rack design very cool and most of all the guys and girls driving the shuttles and loading the bikes are super friendly and genuinely welcoming. Nice one!

Counting the sleeps now to the next Rotorua adventure.